A bold vision — a contractor agreement written in plain English

We were proud to help Manawanui achieve their bold vision of a beautifully clear contractor agreement — an agreement that would help people with disabilities hire their own support team.

Manawanui is a non-governmental organisation that helps people with disabilities use their available funding to hire the support people they choose. This usually means hiring people as contractors. But hiring contractors brings risks. Misunderstandings can turn into stressful disagreements that may involve lawyers and unnecessary expense.

Manawanui wanted an agreement that would be the foundation of a positive working relationship for everyone involved.

Creating an agreement that would inspire confidence

Rob Creagh was the Manawanui project manager in charge of the new agreement. With over 15 years experience in helping clients hire support people, he had a clear vision of what the agreement needed to do. Put simply, it had to give Manawanui’s clients the confidence to hire contractors by themselves. That meant the agreement had to be very easy to understand, scrupulously fair, and as concise as possible.

I found it easier to understand, and that gave me the confidence to discuss it with someone I wanted to hire

Most importantly the agreement had to explain exactly what it meant to be taken on as a contractor. Manawanui staff were constantly answering questions from clients and support people who were confused about the difference between an employee and a contractor.

We used an idea from Lord Denning, a famous 20th-century English judge, to make sure readers got the message. Denning’s ‘red hand rule’ states that unusual parts of an agreement should be highlighted, and that particularly unusual ones should be ‘printed in red ink … with a red hand pointing to it’.

We felt a red hand would be overkill. But we put the most important words in 16-point bold red type at the start of the agreement: ‘You will be a contractor not an employee’.

Leonie Home found this particularly helpful. Her son Torrin has cerebral palsy and she has arranged his care for over 10 years. ‘Explaining the difference between a contractor and an employee has always been a problem. With the old agreement, we had to tell people we wanted to hire to ask a professional to explain it. But now it’s right there on the first page — in straightforward language.’

Halving the original text by focusing only on what mattered

Deciding on the content of an agreement can be tricky. Especially if you begin with wordy source material that covers a large number of scenarios. Cutting too much text can create ambiguity and cause more harm than good.

Rob’s experience gave us the points that mattered. Using only relevant content and ‘translating’ a lot of legal language into plain English meant we could cut the original word count in half, from over 2,000 words to under 1,000.

Linda Barnes is paralysed from the waist down and arranges her own care. She found the new agreement’s language easier to work with. ‘It sets out the arrangement in a straightforward way. I found it easier to understand, and that gave me the confidence to discuss it with someone I wanted to hire — we even agreed a few extra points we wanted to add in.’

Insisting on ‘no grey areas’

Manawanui’s first duty of care is to its clients. But Rob’s brief wisely called for an agreement that was scrupulously fair and considered the contractor’s likely questions and concerns too.

This approach guided the order of the agreement. Topics that are likely to be top of mind for both sides, such as how to deal with disputes, and how and when contractors get paid, appear right up front.

And the new agreement lists the potential downsides of being a contractor on the first page, pointing would-be contractors to Inland Revenue’s website so they can find out more about GST rules.

Congratulations to Manawanui for having the vision and determination to create a legal agreement focused on clarity and fairness for all. As Leonie Home put it, ‘Both sides know where they stand because it’s all clear in black and white — with no grey areas’.

Getting it all out in the open 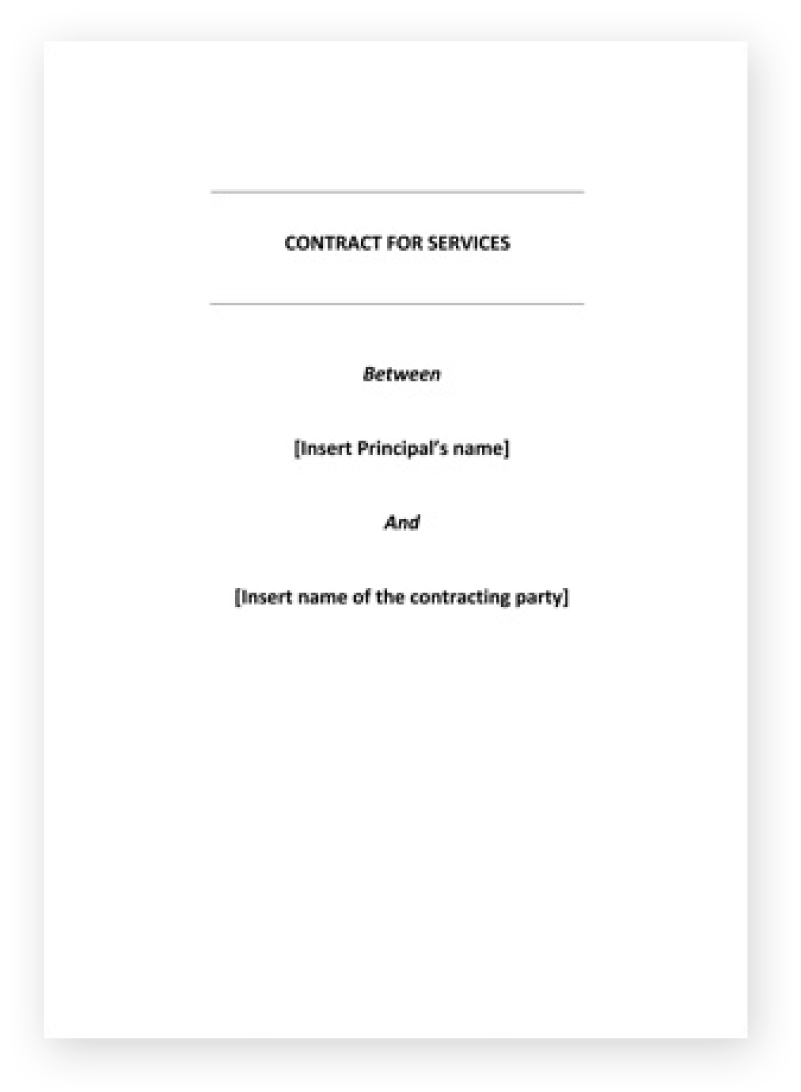 We used ‘statement’ headings to tell readers the key point of a section.

You will be a contractor not an employee

We used ‘statement’ headings to tell readers the key point of a section.

If problems come up, we will work together to try to solve them

The parties agree and acknowledge that their relationship is one of independent Contractor and Principal.

The Contractor will be solely responsible for all tax liabilities, ACC contributions, fines and any other liabilities arising from or payable in connection with the agreed Fees for the provision of the Services.

You will be a contractor not an employee

You will be a contractor. This means that you will have to:

You can find out more about tax and GST at www.ird.govt.nz

You won’t be an employee. This means that you:

First we cut out what we didn’t need, like the verbiage about the contractor not being entitled to bind the principal.

Then we used plain English to make the key points clear.

Finally, we looked at how to make the contract fair and helpful. We added text that explained what it means to be a contractor — and how that’s different from being an employee.

In this contract “Confidential Information” includes but is not limited to:

(a) information about the Principal’s employees, contractors, family and friends; and

(b) all information which the Principal considers to be confidential (whether labelled confidential or not) or which it considers might cause them harm or disadvantage if it were available to and/or used by any third party.

Both parties must treat the content of this contract as confidential and neither party must disclose the terms of this contract to any person except with the prior consent of the other party, or where required by law.

When you are working under the contract, you may get to know things that I want to keep private. This is confidential information.

The confidential information may be about me, my family, or my friends.

You must not share this confidential information with anyone.

You’ll notice that this rewrite is much shorter. Unlike the previous example, removing text here makes things clearer and ensures only the necessary information is communicated.

Get in touch to discuss your projects

Transforming contracts can be a fantastic experience, for you and your customers.

Contact us to discuss your ideas by completing and submitting our project planner, calling 0800 497 483, or emailing enquiries@write.co.nz.